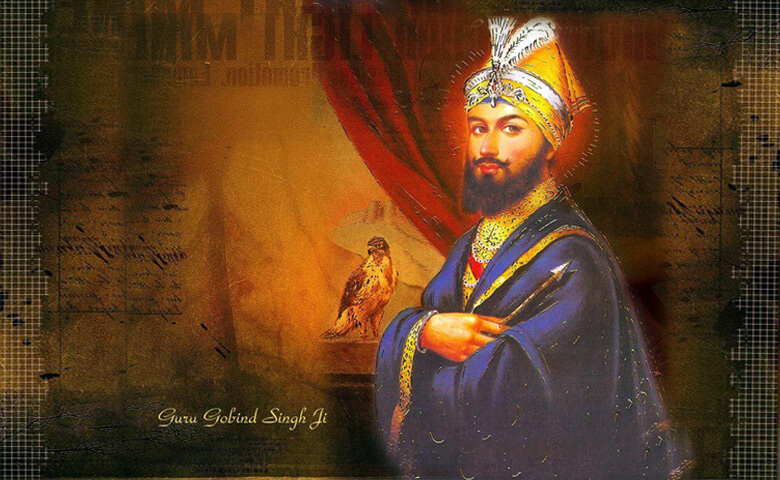 The Sikhism was pioneered by Guru Nanak Dev Ji in 15th century and this religious movement was respected by all other religions as Hinduism and Islam. After this other 9 spiritual teachers gave their contributions to foster this spiritualism which was far away from all pretensions and false beliefs.

Guru Gobind Singh Ji was born on 05 Jan 1666 in Patna. His father 9th Guru Tegh Bahadur Ji and mother Gujri Devi Ji were also embodied with love and generosity for mankind. Guru Gobind Singh was named as Gobind Rai in childhood. At that time there was the rule of the Mughal Empire and the contemporary Emperor was Aurangzeb who was really cruel for his aim to convert the religion of all people into Islam.

Guru Gobind Singh Ji was the epitome of love and sacrifice as sacrificed his whole family for the safety of humanity and religion. At the same time, Guruji also told how to face brutality and cruelty. After observing the height of injustice and oppression by Mughul emperors Guruji decided to form some different religion and at that time the Khalsa Panth came into existence. In 1699 on 13th April Guru Ji founded a new belief which was against all misbelief and cruelty on the name of religion.

This founded belief was named as Khalsa Panth by Guruji and also tested the love of His disciples for religion and truth. It was really significant day for Sikhism and Sikh people. After that, they were known with a particular identity and they had some particular norms of leading life. Guru Gobind Singh Ji instilled bravery valor and courage among Sikhs which was extremely needed to them in that time of vices and autocracy of the Mughal empire.

Guru Gobind Singh Ji fought various invasions with Mughal Emperors and got victory over the enemy. Guru Ji told his Sikhs to be generous as you can but be courageous at the same time to fight with the wrong as we should not bear the wrong because it will enhance the evils on the earth. Guru told Sikhs that the sacred religious book of Sikhs Shri Guru Granth Sahib Ji will be served as Guru for Sikhs and pave a way to virtue and humanity for them.

The journey which was started just to finish the superstitions and misbelief on the earth ended up at the force of people who will serve the truth and help the needy who will be in pain. Life of Guruji was full of pains as he had sacrificed His family for the religion and truth.

He sacrificed his four son father mother and himself for the nation. That’s why he is known as the epitome of sacrifice. In his last years of life he met with Banda Singh Bahadur who got the method of meditation and became the warrior who avenged on Mughuls for all the pains that were given to Guruji’s family and Sikhs.

In the last days of His life, Guru Ji spent some time in isolation in the forest area of Machhiwara Punjab where was stabbed by one person in the rage. So He was a true warrior who changed the concept of being religious and told the people how to survive for others in the cruel land.

He has also written sermons included which Chandi Di Vaar in which He told about the time when it comes to the dignity of women and she can become goddess Durga just to vanish the evils. Guru ji was never in favor of violence but He told people that if we want to eradicate vices from the earth then we have to fight with it. Guru Ji was the person who told Bhai Ghanniya Ji to heal the wound