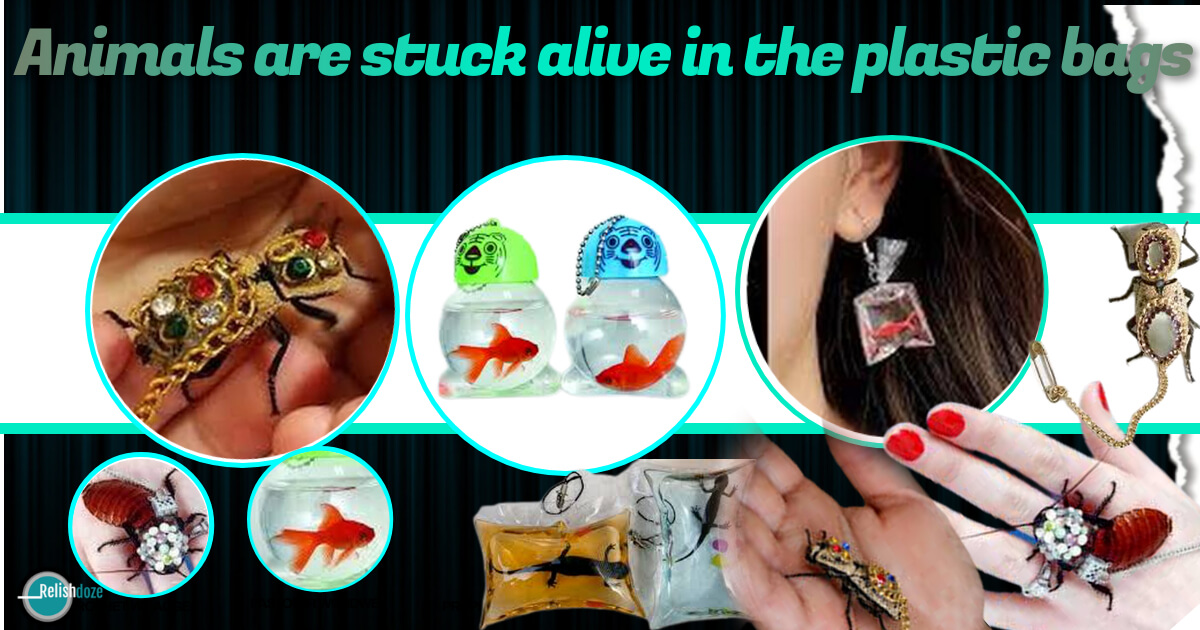 A strange and terrible trend occurred in many countries. It was originated by China and most countries have adopted this trend. The trend is – “living animals are stuck inside plastic bags with minimal amount of water”. China made key chains and Key rings with it and some other countries took an idea to create a new trend, they are making broaches and ornaments with live animals. Isn’t it cruelty? Do they not deserve freedom and respect?

These plastic bags contain some liquid and limited amount of oxygen. Whenever, oxygen will wear off and food will not available for animals, they will die after a few days.  It is totally condemnable.

Additionally, In this case, the animals advocate noting that the absence of food and the difficulty of oxygen make the animal kill faster. Also, honestly, it doesn’t take an expert to understand that an organism won’t live in a plastic sack for long.

Who gives us the right to kill animals and take them to imprisonment?

Does not matter how you look at it, the act of driving animals into the key chains is just cruelty. Surprisingly, China does not have any government aid laws or Welfare laws to deadlock this ridiculous treatment of live animals. These animals are exposed to a slow death by suffocation in a tomb filled with water.

Aquatic Animals are very sensitive to temperature and in the plastic bags; it is the greenhouse for them. Is this the only left for the people in the trend? How frightful it is. This curious trend need to be ban and strictly rule should apply for animals. They are the beautiful creation by nature. We should love them also give them respect and independency.

It does not end here; some countries are using live animals as ornaments, which are blasphemous.

Unfortunately, it is not the first time when animals have featured in unusual fashion trends. In South America, living beetles are covered in gems and they are also making brooches. This is absolutely cruel and disgusting. It can be seem as we are harming the animals.

Over the years, a company launched a watch stuck inside live ants. People are criticized a lot for watching it and later the company said that it was a joke on April fool’s Day. Seriously, is this the type of joke action?

One side comes to see that a jeweler designs jewelry in the form of a necklace. He designed around mesh in which a rat is left and when any model wears that necklace, the rat rolls around in a round mesh necklace, tries to get out and it becomes a trend. How wrong is this with animals?

Here, it is also another staggering phenomenon that marine animals are endangered by humans. We all love balloons and usually, we like flying balloons. With this human interest, marine animals are about to die because when we release the balloons in the sky, it gets trapped in the flying birds and sometimes it is going into the water area where the aquatic animals are trapped inside. Slowly and steadily, these aquatic animals and birds form half of its population.

The reason for this is: Hard plastics have a specific shape and size that can get guts and block it. On the other hand, soft plastics have the ability to be compressed and fit easily. This is how plastics are harmful to nature. Soft plastic is 32 times more harmful than hard plastic because the bird keeps it hungry and as a result the bird dies because it has no nutritional value. When plastic stays in the sea for a long time, it attracts birds and other marine animals because these plastic packets create odors. Balloons are usually made of polymers that allow in a biodegradable environment.

It is cruelty that is being deliberately committed by people and sometimes it is negligence. It is quite clear. So, why are we humans using things that are harmful to our nature? As human beings, it is our responsibility to take care of our nature and speechless animals.

But strangely, all of us humans only live our lives and we don’t even care about our nature. It is the biggest cruelty. “Human”, human means humanity; this means that if someone has a problem; it is a responsibility to help them.

Animal cruelty is real and vast. It is happening to all kinds of animals in every corner of the world. The animals are capable of forming social relationships and spreading love, they also feel pain, fear and frustration. Thus, it becomes the duty of humans to stop animals against cruelty. Let us hope for better results from the human side. As such, we as people must overcome this cruelty and become aware simultaneously.