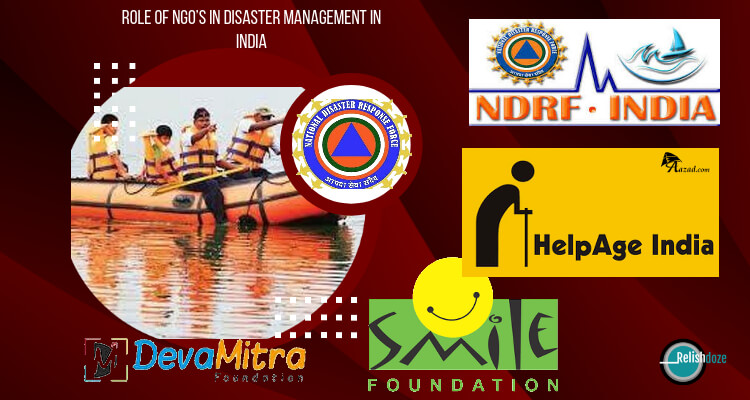 Disaster management can simply be defined as the timely management of a disaster with the help of an emergency team which provides resources to the area which got damaged due to natural or man-made disaster. The disaster management task forces provide welfare services to the victims and support normal lives to get established again and also provide support to re-establish their properties.

In India, situation is very vulnerable because of unique geo-climatic conditions.

Our country is often affected by drought, flood, earthquake, land slide etc. During rainy season peninsular regions of Southern India are mostly affected by cyclones and on the other side Western India is affected with severe drought in summer season. Whether it is Gujarat’s Earthquake which had destroyed everything and millions died or Kerala’s flood, disaster management saved their lives and setup their lifestyle again and provided them medicine, food, love & care which helped them to recover from the great loss of health and wealth. People who lost their dear ones became strong enough because of heartily support.

What Exactly Disaster Management Teams Do?

So, they have the responsibility to setup livelihood again. They put their lives on stake to save people’s lives and property. It is not easy to go in a destructed area where some people are losing their lives every minute or second. These disaster management teams go there after appropriate training and carry all the essential remedy items with them. Their training helps them to save the lives of victims without getting their lives into trouble. The countless disaster have taken place yet and volunteers and disaster management teams always go to such places to save the lives. Either they are linked by the authorities like Government Agency, NGO or they are some nearby civilians who themselves come forward for the disaster management for the sake of humanity.

But not only NDMA, there are many other organizations which are rendering their services in Disaster Management and really serve wholeheartedly during disasters. I am sharing some of the best organizations of Disaster Management with you, which have saved many lives yet and are ready to serve in future too. They are ever ready to save the lives of victims of any kind of disaster. Let’s have a look.

The National Disaster Management Authority was founded on 23 December 2005 and it is the apex body of the Government of India which is bound to make plans and policies of disaster management. Most of the times, disasters are unexpected and it is almost impossible to find a clue and plan for it earlier. That is why the disaster management continuously work on the planning, organizing, coordinating and implementing measures for the prevention of disaster and dangers.

They try to reduce the risk of disaster, its consequences, effects on people and surroundings. The NDMA plans the rescue, reconstruction and rehabilitation of the affected area. It also draws and regulate guidelines for the States by coordinating with the State Disaster Management Authorities (SDMAs) to practice the policies in a best way possible and in a distributed manner. Prime Minister of India is the head of the NDMA including nine other members but in 2020, there have been five other members too.

NDMA works with the vision to “build a safer and disaster resilient India by a holistic, pro-active, technology driven and sustainable development strategy that involves all stakeholders and fosters a culture of prevention, preparedness and mitigation” and to reduce the risk of disaster and to tackle the threat & minimize the loss in crisis NDMA trains other Government officials, institution and communities and provide with essential equipment. Apart from that it also trains the other disaster management cells of different States of India at the local levels.

The NIDM is formerly known as the National Centre for Disaster Management. It was established in 1995 for the training and capacity development program for the management of National Disasters of India. NIDM has several branches on national as well as on the regional basis around the country. The National Institute of Disaster Management was formed under the Act of Parliament and this institute is headed by the Union Home Minister.

NIDM works with the vision of “Resilient India-Disaster free India” and to fulfill this, the institute works on the planning and promoting training in the area of disaster management. Policies, mitigation measures, documentation and prevention mechanisms are the key responsibilities of the Institute. NIDM also works on the development of national level information base which are related to disaster management in India. Time to time, the institute conduct mock drills, hazard hunt exercises and crises communication among their staff. These types of drills are conducted to check the preparedness and alertness of the agencies and to regulate the disaster management effectively.

To face the threatening disaster situation or disaster the National Disaster Response Force was designed under the Disaster Management Act 2005. It was founded fourteen years ago in the year 2006 with the motive of “saving lives and beyond”. The NDRF falls into the Ministry of Home Affairs and it is responsible to provide aid and assistance to the affected States. When severe calamities occur, this force reach and provide help to the victims of natural disaster.

An annual budget of approx Rs. 250 billion is issued to the National Disaster Response Force by the Government of India for the disaster management. NDRF has proved its importance by doing highly skilled rescue and relief operations in the affected areas. The force goes through intense training and re-training for such cores.

Apart from the Government of India and officials, various other agencies also work in this regard wholeheartedly with the motive of saving lives by doing the disaster management occurred in any state, region and place. Here are a few examples.

Dera Sacha Sauda is a non-profit organization that works on humanitarian assistance in natural disasters. It has the team of volunteers, which works on the relief operation across India as well as all over the world. They have conducted many successful relief operations in Gujarat, Darjeeling, Nepal, and Canada etc. The volunteers work with the vision of saving the lives and to re-establish the lifestyle of victims by providing food, medication, shelter and every possible aid. The organization works selflessly and serves the humanity among the masses.

Rapid response is an Indian organization, which helps people across the country at the time of disaster by providing food, medical aid, education, shelter and tries to rebuild their lives by helping them in overcoming from the loss of people and property. Recently the organization had worked in Kerala, Assam and Odisha State and saved lives in these areas.

The DevaMitra foundation works on the natural disaster of India and run disaster relief operations with the motive of serving mankind across the India. It works on various aspects and disaster management is one of it. It has come ahead to help people in every possible way and save the lives of the victims of disaster.

HelpAge India started its disaster intervention program in 1980. It is a voluntary organization. Everyone suffer equally at the time of disaster but the elder are the most vulnerable in the line so, this organization helps the victims but keep the elder on priority. They are the team of trained and equipped people and run the disaster counter measure swiftly.

Smile Foundation runs the Disaster Response Program and work for the welfare focused on the children and their families in the calamities. The foundation works with a sustainable approach and responds to the immediate need of the affected people. It had rendered its services in many natural disaster responses like in Tsunami, Earthquake in Kashmir, Maharashtra Flood and others. It had started its work since 2005 and still working on this path of serving.

The tough times are the test of who is literally by your side. Thanks to the visionary members of these organizations who understand & contribute to the greater cause of restoring the lives devastated by disasters which don’t discriminate while causing havoc.