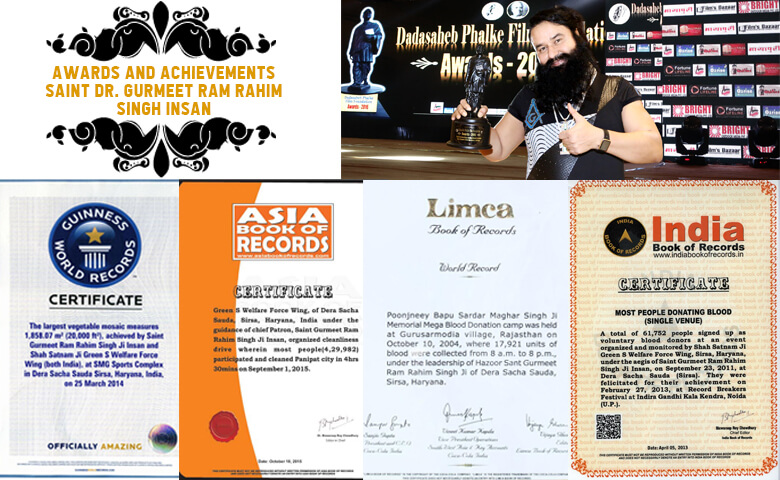 World records and Baba Ram Rahim has great connection as whatever the Saint did became world record. This journey has been begun in 2003 when largest number of people donated blood under the guidance of Baba Ram Rahim. His ideas are unique in this way that could lead the way to world recognition. Gurmeet Ram Rahim has not done this work just to make records but for the welfare of the others.

There was the initiative of blood donation, camps eye screening, tree plantation, body organ donation and many more works which started by Him only for the good of others but it was ended up with miraculous humanity works which are known around the globe now. These works were not new concept for the world but such enthusiasm among people was not seen ever for doing the good of others.

In Dera Sacha Sauda Baba Ram Rahim has started the construction International cricket stadium which was completed in very less span of time and similarly  the construction of Sach Ajooba Washing Machine college and Hospital was remarkable build in very short period of time. The people has given their against dowry and corruption which has also bagged world records for Dera as 55491 and 60551 people have filled forms for this respectively.

This is not the end after that Limca Book of Records Asia Book Of Records and India Book Of records has also recognized the welfare spirit of Dera. Other unique activities like the Largest vegetables mosaic, human droplet , largest poster of the world were done at the premises of Dera Sacha Sauda which was also fantastic job of Baba Ram Rahim.

Without having concern of world Dera followers devotion for their Master has also given birth to number other awards like on the birthday of Saint Ram Rahim thousands of greetings videos were sent to Baba by his disciples which also made record on 15th in 2017. In Baba’s movies number of moments were award winning like millions of people attended premiere together and lit the candles for which The India Book of records appreciated this while giving award. So this journey is not stopped till now  as Baba followers are still doing fabulous works for humanity.