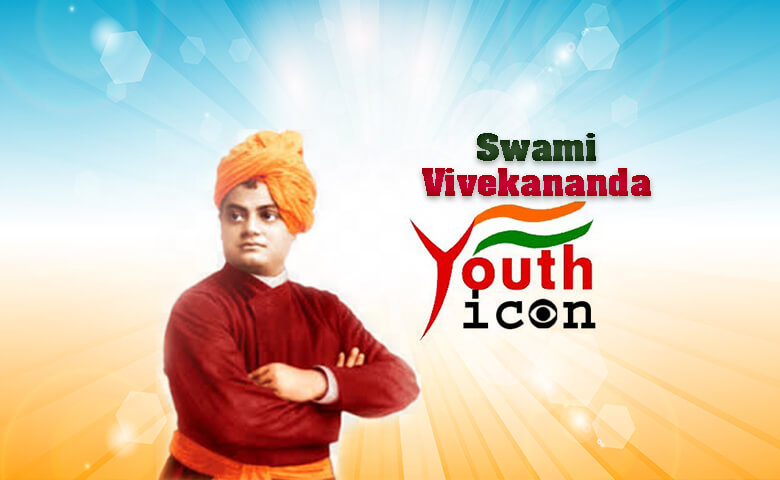 Thoughts have a miraculous power to make a change, which can change our mindset as well as our actions. A single thought which comes to you is to make a change in your personality, however, they are further divided into two – one is the negative one and another one is positive. Change comes with thoughts naturally; a negative thought can invade your mind and on the other hand, a positive thought can make you progress. But there’s a limitation to “the power of thoughts”. A change is impossible without implementation.

So, when we are talking about thoughts, let’s also study a very thoughtful person who has not only himself applied his thoughts but was also followed by the world and who progressed as an author, monk, philosopher, mediator, and human. I’m talking about Swami Vivekananda who first learned life-changing lessons from his master Ramakrishna, adopted those lessons in his own life, and later on, he made the world realize about the power of Indian philosophies of Vedanta and Yoga.

Swami Vivekananda was born as Narendranath Dutta on 12th January 1863 in the holy and divine place of Kolkata, was a great Indian saint. A figure with “high thinking and simple living”. He was a great pious leader, a philosopher, and also a devout personality with great principles. His major works and eminent philosophical works comprise “Modern Vedanta” and “Raj Yoga”. He was a principal disciple of “Ramakrishna Paramhansa” and was also the major initiator of Ramakrishna Math and Ramakrishna Mission. He thus spent his whole life in the dispersion of the life values embedded in the great Indian culture and their significance in one’s life.

Swami Vivekananda was the son of Shri Vishwanath and mother Bhuvneshwari Devi and he was called by the name “Narendranath Dutta” in the early days. He was a child of unquestioned expertise, high cognitive ability, having a great mind and intellectual capability who used to take grasp of all his school teachings at the very first sight.

This excellence was recognized by his Gurus and teachers soon and thus he was named “Shrutidhar” by them. He had manifold talents and optimum skills comprising of swimming, wrestling which were a part of his daily schedule. Influenced by the teachings of Ramayana and Mahabharata, he had bottomless respect for religion. “Pavan Putra Hanuman” was his ideal for life.

Narendra a true lover of heroism, was mystical by nature. Despite his upbringing in a spiritual family and orthodox environment, he had an argumentative personality. He questioned and had professional skepticism in his infancy. His entire beliefs were assisted by an appropriate rationale and judgment behind them. These qualities even made him put a question on the existence of the Supreme God. He then visited several gurus and asked each one “have you seen God?”His spiritual quest left unanswered until he met “Ramkrishna Paramhansa”.

Meeting with Ramakrishna Paramhansa and Harmonization of Indian Culture

Swami Vivekananda met Ramakrishna Paramhansa for the first time when the latter visited his friend’s residence in Kolkata. Conscious of the supernatural powers of Swami Vivekananda called him to Dakshineswar. He had a deep insight that Swamiji’s birth was a boon to mankind for the upliftment of the universe. His dire need fulfilling his spiritual inquisitiveness made him finally acknowledge Ramkrishna Paramhansa in the figure of his “Guru” and soul teacher. He was moved from darkness to illumination by his “Guru”. As his deep gratitude and reverence for his Guru made him travel all four directions for the diffusion of his Guru’s teachings.

Vivekananda won the hearts of everyone present in Chicago during his exceptional speech by addressing the audience as “Sisters and Brothers of America”. The thought of unity and considering everyone as one really moved the audience.

Vivekananda quoted ”I am proud to belong to a religion which has taught the world both tolerance and universal acceptance. We believe not only in universal tolerance but we accept all religions as true.” Thus, he set forward the example of the greatness of Indian culture, the worth of Indian religion exhibiting the values of universal acceptance, oneness, and harmony despite multiplicity in cultures.

He played a prominent role in ending India’s cultural remoteness from the rest of the world. He was an utter believer of the Unity in diversity prevalent in India.

Swami Ji was a figure of the highest ideals and great thoughts, He was an inspiration for the Youth of India. The young brains should be filled with the powers of self-realization, character formation, they should recognize inner strengths, service to others, have an optimistic outlook, do tireless efforts, and a lot more was the only aim of his teachings.

Swami Vivekananda Ji was honest and truthful from childhood. His words were so impressive, his deeds were so genuine and he spoke very politely thus everyone wanted to listen to him. There have been many incidents that happened in his life that gave him the inspiration and led him to the way of humanity. Three of these are given below.

Swami Vivekananda said that we must follow the way of truth. He was so adorable by his voice from childhood. Everyone kept hearing him whenever he wont to speak. at some point in class , Swami and his friends were gossiping within the class. Swami was telling them a story and everybody within the group was busy listening him so carefully that they didn’t notice when teacher came. As their teacher started teaching, he heard some gossip. Then he saw that some students including swami were gossiping in one another . He got angry and asked them questions from chapter. nobody gave the solution then he asked Vivekananda and he answered alright so teacher thought he wouldn’t be the one gossiping with them so he told him to take a seat and remainder of them to face abreast of the bench. Then Swami said that he was also the one gossiping with them and telling them a story. So, it’s his fault that he was talking during the category . Everyone including teacher within the class got surprised seeing this obsession of Swami Vivekananda. This incident of his life empowers us to always be truthful and to always follow the way of truth at any situation.

Once in Banaras, when Swami was gone to go to a temple, he was stuck within monkeys around him while returning from temple. They tried scrambling offering food from Swami then he feared and began running, and monkeys also started running after him. There was a saint standing and watching Swami fleeing faraway from monkeys then he told him, “Why are you so scared and trying to urge faraway from your fear, just stay here and check out to face things and see what’s the result.” Swami thought hearing it he should do this , then he turned back to the monkeys and took progress to them and kept on doing same with courage, Monkeys fled away seeing it. Swami became surprised and realized that he must not escape from any situation at any condition and face it confidently. He was so grateful for this lesson and thanked the saint for it. Later, he recite about this incident and said, “If you’ve got any trouble or fear, don’t get away from it, go and face it.” It was a best lesson not only to Swami Vivekananda but also to us. If we implement this lesson of Swami Vivekananda’s life in our real world , no problem would be difficult to beat.

Vivekananda had such an excellent personality that surprised and impressed tons of individuals . Once a foreigner woman became very impressed with Swami Vivekananda’s character and proposed him for marriage. She requested Swami to marry her in order that she could get a toddler with qualities like him and that’s possible as long as he marries her. Then Swami answered, that’s impossible as i’m a monk so I can’t marry you. But, if you would like a toddler like me then there’s just one thanks to fulfill your wish that you simply imagine me as your child from today, then you’ll get a toddler a bit like me. Woman got very surprised hearing it and praised Swami for being so great. This incident of Swami Vivekananda’s life proves how incredible he was. The way he fulfilled wish of that foreigner woman is basically precious and provides us the simplest inspiration. The above three events of Swami Vivekananda’s life prove what an excellent person he was and why he’s inspiration to youth. He possessed an excellent personality, humanity and power of incredible words that give us inspiration and grow our interfaith. That’s why we per annum celebrate Youth Day on his birthday in India.

Arise, awake and stop not till the goal is reached.

You have to grow from the inside out. None can teach you, none can make you spiritual. There is no other teacher but your own soul.

We are what our thoughts have made us; so take care about what you think. Words are secondary. Thoughts live; they travel far.

All the powers in the universe are already ours. It is we who have put our hands before our eyes and cry that it is dark.

The world is the great gymnasium where we come to make ourselves strong.

Truth can be stated in a thousand different ways, yet each one can be true.

All differences in this world are of degree, and not of kind, because oneness is the secret of everything.

If money help a man to do good to others, it is of some value; but if not, it is simply a mass of evil, and the sooner it is got rid of, the better.

For Swami Vivekananda, I have a different point of view. I believe our actions are reflection of our thoughts, he was the one who not only have positive thoughts but also had a spirit to make his thoughts change every mind whichever comes in his contact. His thoughts are more powerful than any other thing he had. He had a dream for our nation, it’s people and for this world and I must say with every passing second of his life he made it come true. He lives for this nation, to make it one by connecting every single person with truth. A person who had reached the heights of his dreams and now world follows his footsteps with the same spirit to unite the world with truth and divinity.

Let’s check what ideas this man had for this nation, it’s people and for this world..

After all dreams remain dreams unless and until we make our best to make them come true. A person who dedicated his entire life for the best of mankind, we can’t be the same as he was but we never know who’s having that spirit to make a change in this world. We all are one but we can’t unite because of our diverged thoughts. We all have been divided with baseless ideologies which never had an aim to unite us.

Forgetting what we are let’s actually be what God has made us, because our life is for a special reason and we can’t deny this fact that we are a bit special than other living organisms of this world. We have a chance in form of life and we have the power to make a change with our thoughts with a limitation that the power of our thoughts remains locked unless they are implemented. Implementation ends with result, a negative thought on implementation is disastrous and a positive thought gives success to you and to the world as well.